Just back from Biofach with a few taste treats from generous exhibitors. 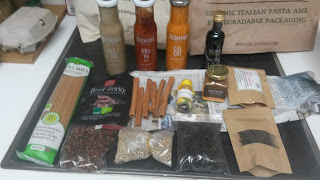 My twelve hour train journey home allowed me to read through most of this year’s ‘World of Organic Agriculture’, the nineteenth edition of the most authoritative source of statistics and commentary on the state of organic farming.  Here’s ten highlights from this year’s edition (all percentile changes refer to 2015-6).

All of which begs the question: is organic still a niche?
Posted by Textual Healer at 13:30