Down and out in Paris..

and Frankfurt and Nuremberg and Hendaye and most other places in the western world.

Last week I was in Paris and, looking for somewhere to eat, I found myself in Place de la Republique (not the best choice for eating out).  There was a large group of people, three hundred or so, gathered in the square, so I wandered  over to find out what was happening. It turned out it was a soup kitchen, catering to the homeless and destitute of Paris. 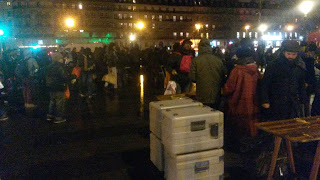 One of the volunteers waved me over and offered  me a bowl of food.  (Do I look that rough?)  It was a tasteless mix of cous-cous and carrots. I could hardly eat it.  But at least it was warm, full of carbohydrates and vitamins.  I offered a donation and the volunteers refused, saying please contribute via the net .  George Orwell wrote about this in the 1920's.  Ninety years later, have things not got better?  It seems not.

A few days later in Nuremberg I made acquaintance with a young spice grower from India, attending Biofach, and on his first visit to Europe. He asked me lots of questions - including why there where so many beggars on the streets. I didn't have an answer.  It's not a specifically German, French or British problem.  I tried to explain some of the issues, knowing that  middle class Indians have in-built defence mechanisms against beggars, including the much repeated (and hopefully untrue) story that some children are mutilated at birth to make them more 'beg-worthy'.   He looked askance at me when I dropped a few coins into beggars'  plastic cups.

There are definitely more beggars and homeless people on the streets of the western world than there were twenty years ago. This is not a problem restricted to one country or its policies.  We can't blame May or Macron or Merkel.  one might try to avoid them, but if you spend any time at any major railway terminus it is just not possible (and I have spent a lot of time at  major railway termini this past week)

So how do we respond to this human suffering? To alleviate the immediate problem you can take out a standing order to support, or preferably become a volunteer with, an organisation such as restos du couer.  But in the longer term, we need political change, and if I knew how to achieve that I would be more content.

Labels: Down and out, restos du couer, why the hell is the western world so fucked up?